Ford has announced a refreshed and revamped 2023 Escape lineup that maintains plug-in hybrid and hybrid models, with the latter among the versions that can be had in a sportier-looking ST-Line guise.

As the automaker positions it, the move is a natural extension of what it started with the introduction of the Bronco Sport for 2021—when it effectively split the Escape’s size into two different vehicles and form factors. Go a little sportier and more city-savvy, and the Escape is still the one, but pivot to the boxy side, with more overt hints of rugged weekend wear, and you end up at the Bronco Sport.

Among compact SUVs, the Honda CR-V and Toyota RAV4 are the elephants in the room. But as Ford rightfully points out, if you add the sales of the two models together and you blast past both of those other sales champs. And that’s before even taking note of the 40-mpg Maverick hybrid pickup. 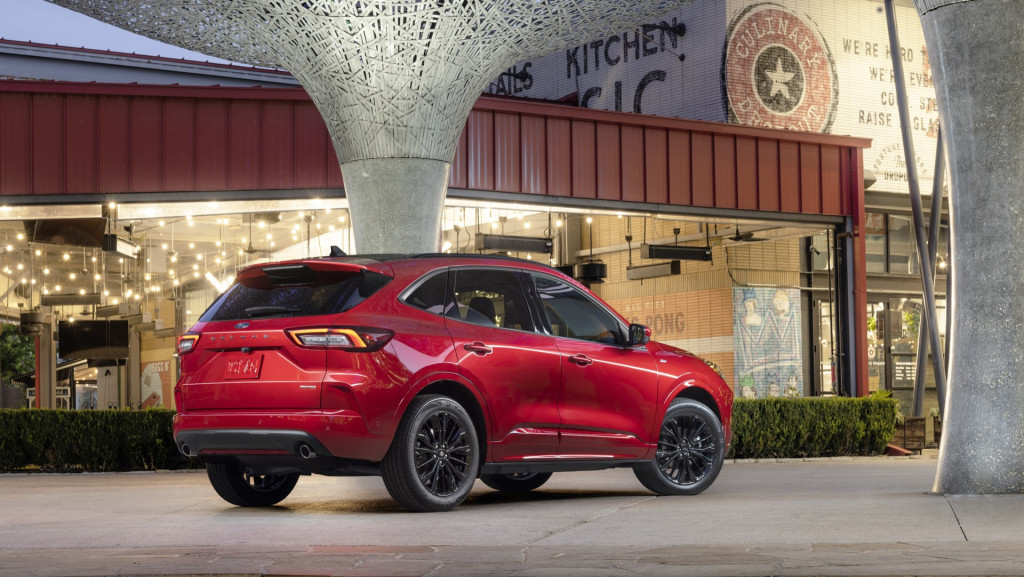 Ford still positions its hybrid versions of the Escape as an upmarket powertrain but not necessarily the top one. The revamped lineup features Base, Active, Platinum, and Plug-In Hybrid models, with the new Active level replacing the former SE and SEL. Base and Active come with a 181-hp, 1.5-liter turbo-3 and front-wheel drive, while the top Platinum can be had either as a hybrid or with a 250-hp, 2.0-liter turbo-4—both with all-wheel drive.

The Hybrid’s powertrain is carried over, with a 2.5-liter Atkinson-cycle inline-4 and traction motor, managed via a planetary drive system, making 200 hp combined and connected either just to the front-wheels or, mechanically, delivering all-wheel drive. For 2022, Escape Hybrid models achieved 40 mpg combined with AWD and 41 mpg combined with front-wheel drive.

The Escape Plug-In Hybrid is a standalone model in the lineup and only offered with front-wheel drive. It has a version of the same system, but with a 14.4-kwh battery pack that can be charged up in just 3.5 hours on 240 volts or less than 11 hours on 120 volts. Then it can go 37 miles on plug-in electric power and provides 210 hp combined (slightly less than the 221 Ford quotes for the 2022 version). 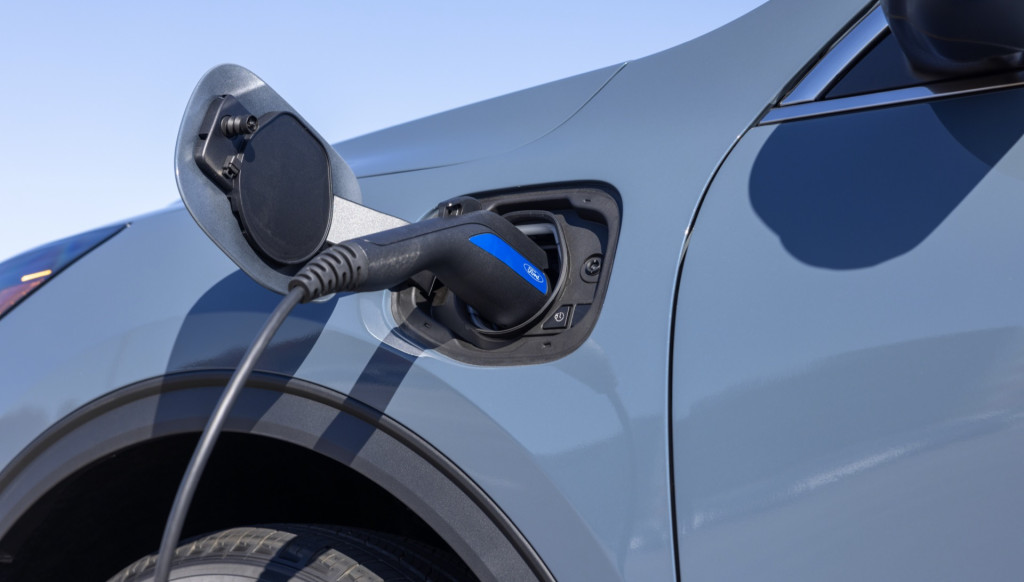 Ford boasts that between Auto EV, EV Now, EV Later, and EV charge modes, owners can pick which one best meets their needs; but as we’ve noted in our review of the Escape Plug-In Hybrid, EV Now doesn’t always lock out the gasoline engine when there’s a full charge.

Slotting just below the Platinum is a new sporty ST-Line model that can be had in all but plug-in hybrid form and in Select and Elite packages. Altogether, the ST-Line will make up 50% of the Escape lineup.

The ST-Line is primarily a sporty-looking upgrade package bringing a black mesh grille, a rear skid plate, and a single-wing rear spoiler, plus red stitching and seat trim, a center armrest, and more inside. Having seen this in person, it accomplishes that, with the blacked-out look sidling in closer to hot hatches than SUVs. In actual performance, its firmer suspension damping, flat-bottom steering wheel, and 18-inch wheels may help convey a hint of the performance look. Elite versions also upgrade to 19-inch painted alloys. 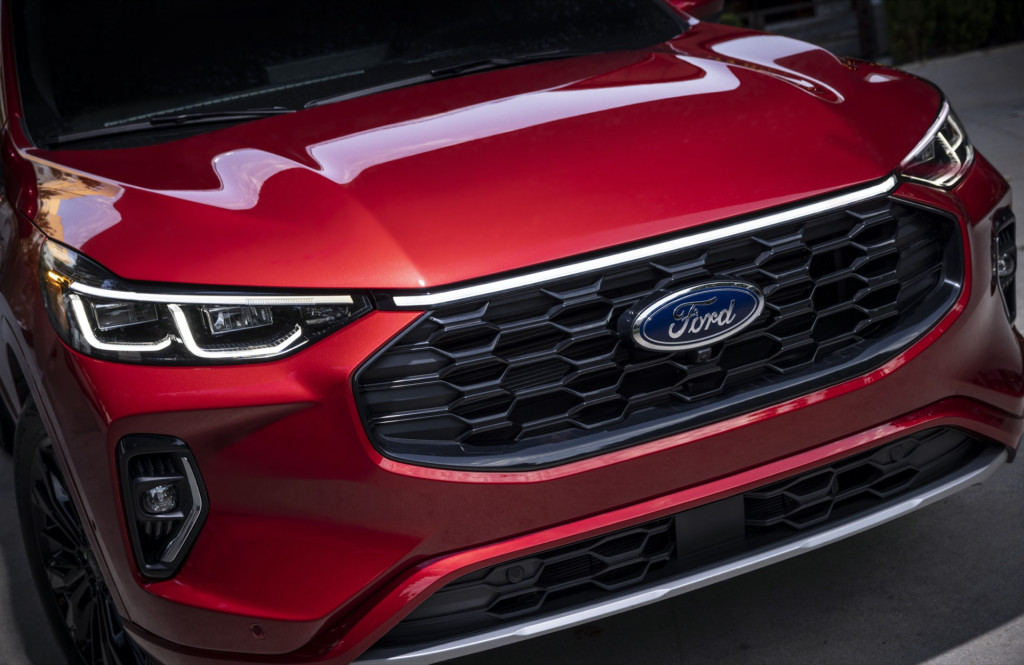 All versions of the Escape now include LED reflector headlamps, upgraded lightning, and a sliding rear seat that adjusts six inches fore and aft to help juggle space between cargo, child seats, and other passengers.

The Escape gets Ford’s Sync 4 infotainment system, adding available cloud-connected navigation and enhanced voice commands plus standard wireless Apple CarPlay and Android Auto connectivity. Top versions get a 13.2-inch center touchscreen and 12.3-inch digital instrument panel, and all versions in the lineup will get over-the-air software update capability for a range of vehicle systems. 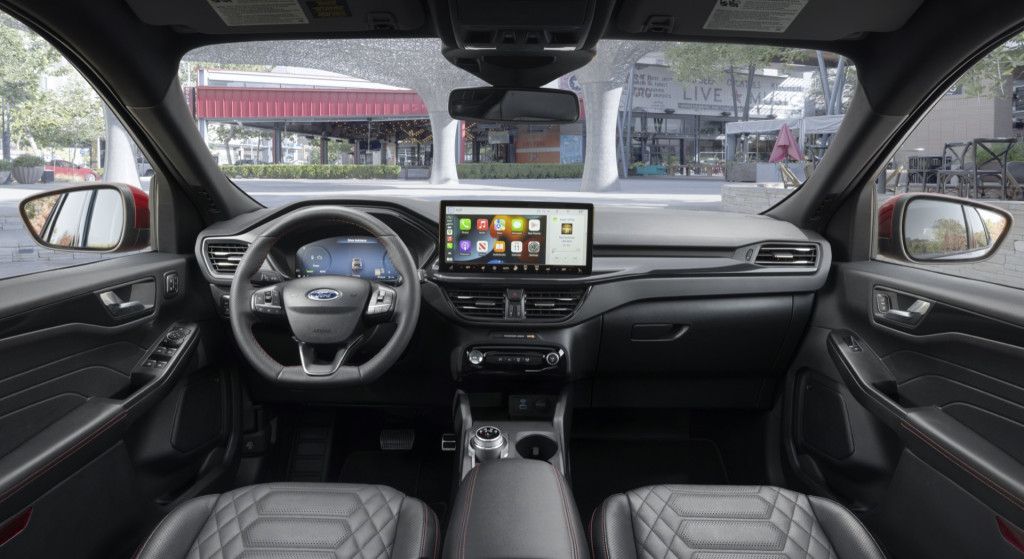 If there’s a surprise here it’s that Ford doesn’t expect the reconstituted Escape to sell in much higher numbers than before as a hybrid; it sees about 15% hybrids and 7% plug-in hybrids in the whole Escape mix. It said Escape Hybrid and PHEV models are sold to an entirely different kind of buyer than the Mustang Mach-E, so it’s not blaming what those in the industry call cannibalization.

More hybrids are on the way, Ford has hinted; but they aren’t here quite yet. Toyota has already been selling nearly 50% of its RAV4 crossover in Hybrid or RAV4 Prime PHEV form, and Honda aims to sell half of its redesigned 2023 CR-V models in CR-V Hybrid form.

Ford says that the revised Escape lineup will reach dealerships in early 2023.